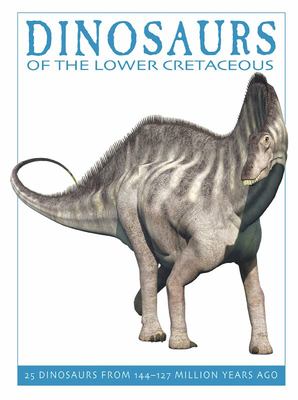 Dinosaurs of the Lower Cretaceous

Praise for Dinosaurs on My Street by David West:

Titles in the Firefly Dinosaur series:

This series of six books is for dinosaur enthusiasts and novices alike. It covers dinosaurs living in the six periods that make up the Mesozoic Age, which spanned prehistoric time 227 million years ago to 65 million years ago.

Each book is an illustrated guide to 25 of the best known dinosaurs of that period. Up-to-date information accompanies the highly detailed computer-generated artworks -- big, colorful, lifelike, fill-the-page dinosaurs.

The books open with an illustrated introductory spread that provides background information on the time period in which the 25 dinosaurs lived. The dinosaur spreads bear a brief introduction, information on when and where it lived, its size, and where fossil remains have been found. They also have a shadow icon of an adult, child, or animal (e.g. domestic cat) which indicates the size of the dinosaur.

All dinosaur-loving readers will thrill at the giant and engaging dino artworks. These books are sure to be enjoyed over and over again.